Rock Around The Clock - Oral History, Reminiscence and Archive Project

Rock Around The Clock (Pilot) - Oral History, Reminiscence and Archive Project . Working with an establishment caring for those aged 70 - 103. Exploring Post-War memories of the1950's, stimulated by taster sessions from artists workshops and entertainers. These activities, interviews and discussions were filmed and will be archived for future generations
Thank you to Newport Film School for the use of The Divided Hours and to :
Rick Prelinger -Prelinger Archives
P.O. Box 590622 San Francisco, CA 94159-0622 USA

The film is subtitled for the hearing impaired.
Thank you to staff and residents at Old Station House for taking part in this project.
Particularity Elizabeth and Betty and those who contributed with their memories.

We would also like to thank:
Martin Loach
Helen Jacobs
Nick Gill
and
Cait Sweeney

A very big thank you to Abigail Brown, Arts Development Officer
for Vale of the White Horse District Council and the contribution they made to this project.

Posted by Sharon Woodward / WoodwardMedia at 01:31 No comments:

Rock Around The Clock - Pilot 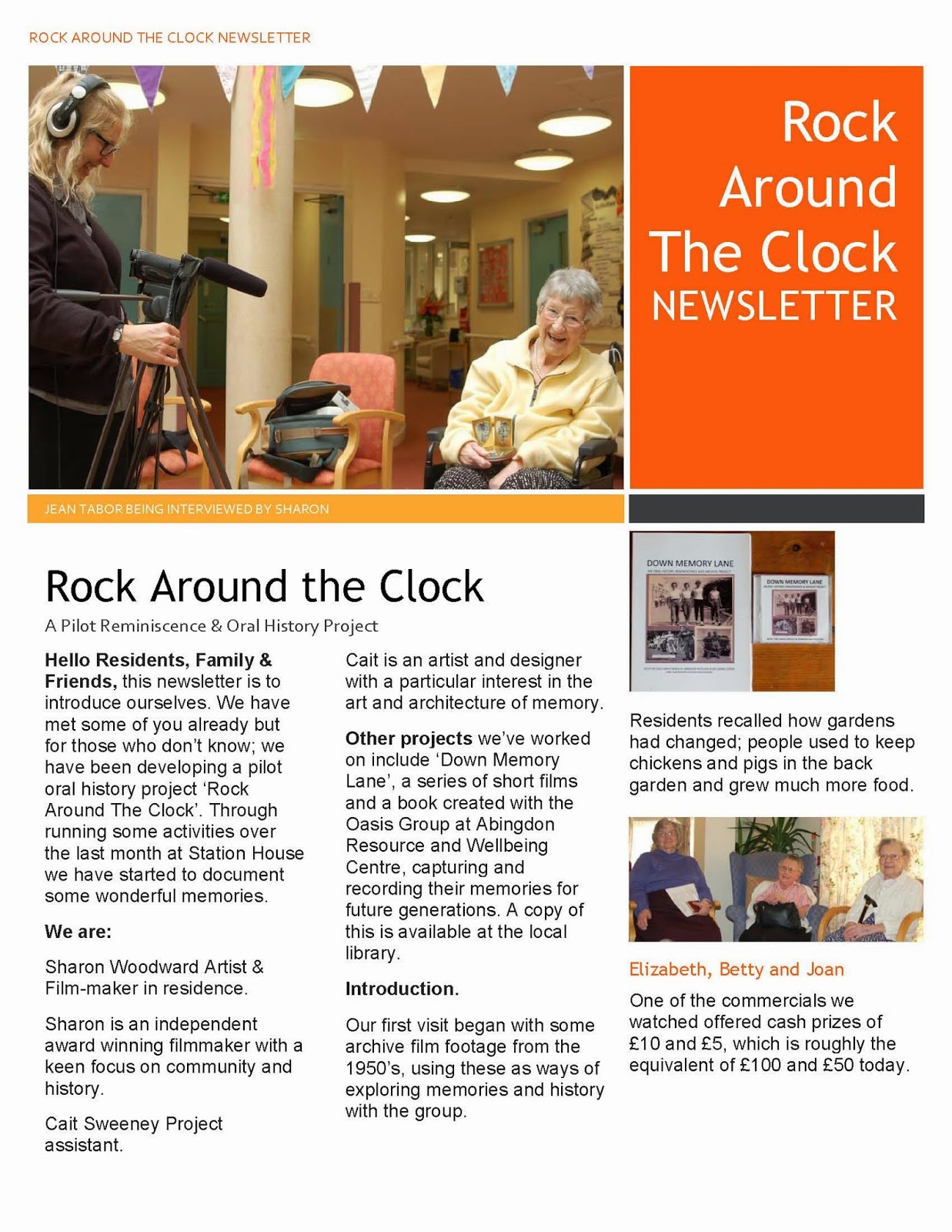 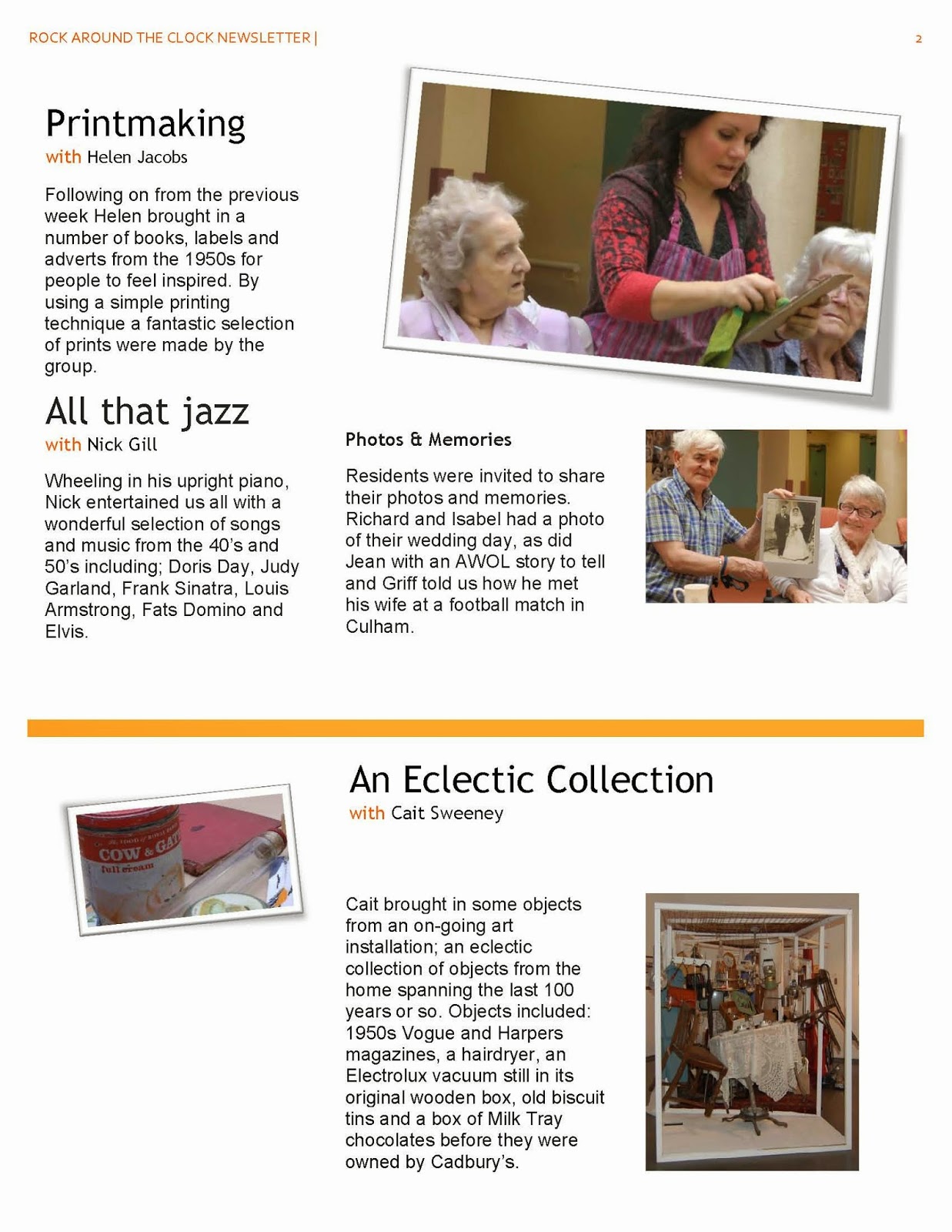 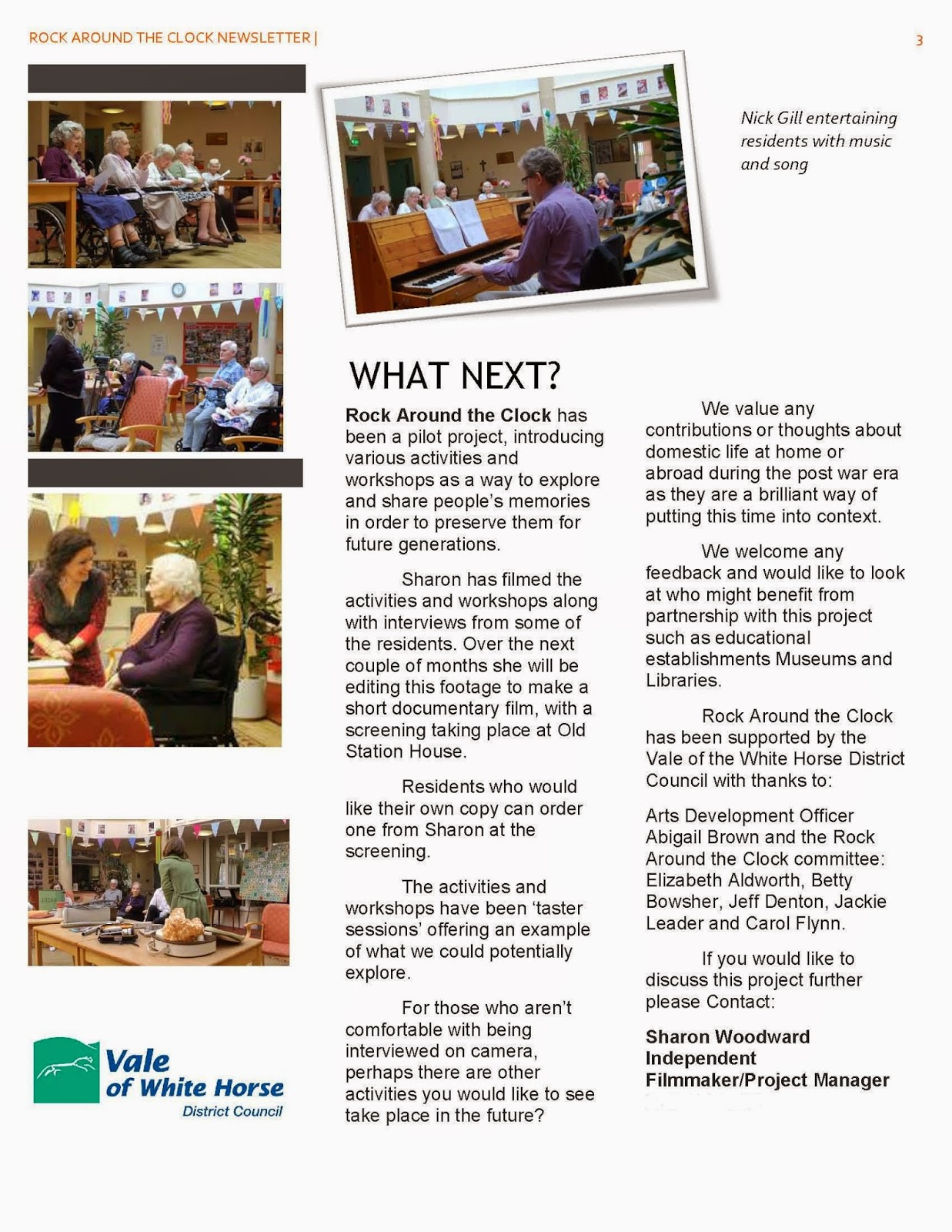 Posted by Sharon Woodward / WoodwardMedia at 00:52 No comments:

Show and Tell of Interrogation Following the activities and on the day of Cait Sweeney’s show and tell session at the Old Station House. I interviewed a number of residents and they spoke to me of the memories evoked during the activities. 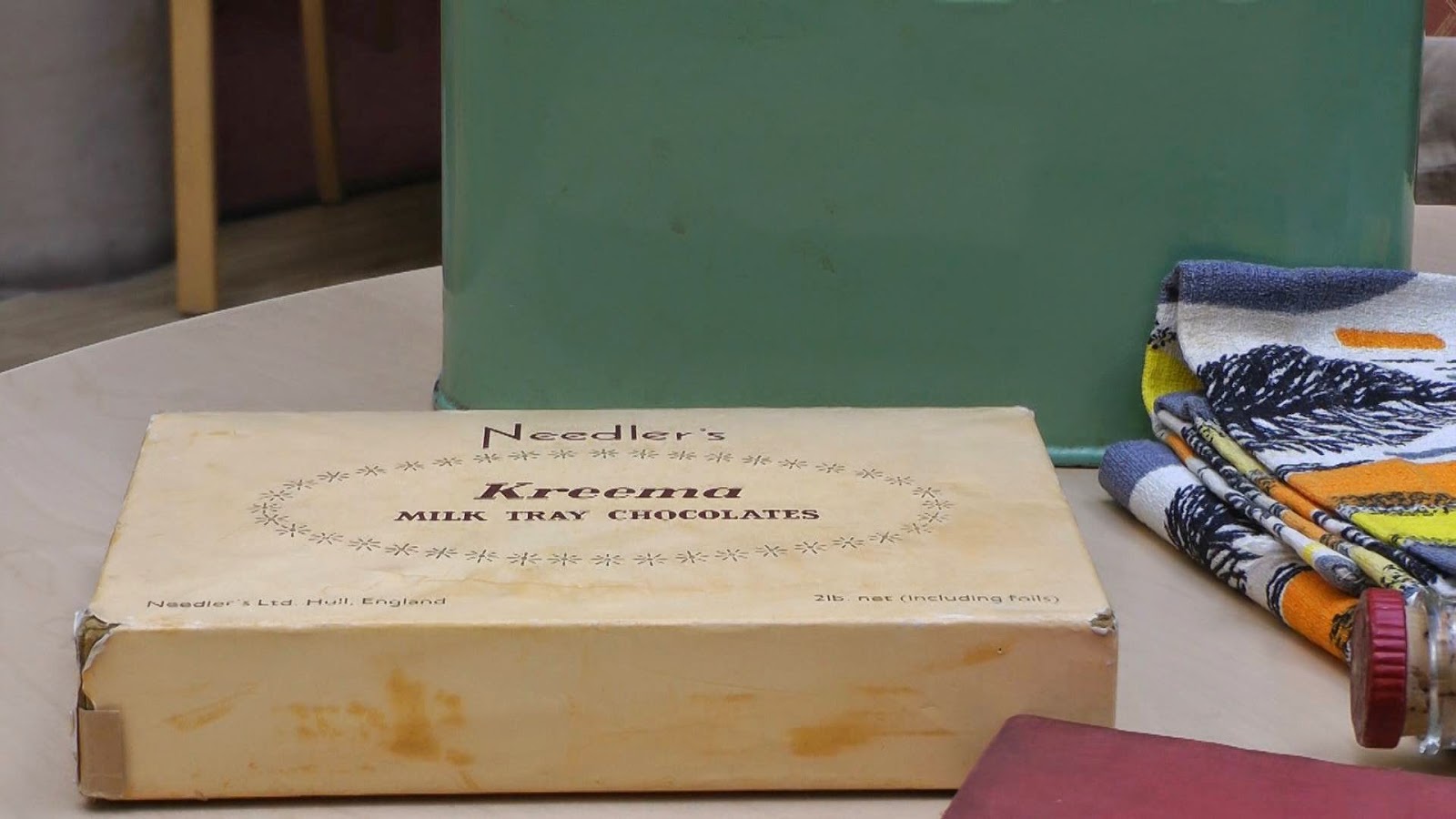 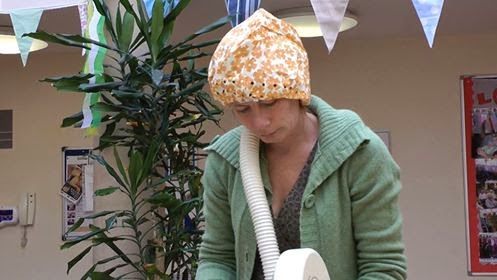 One such person was Fredrick John Griffin he recalled meeting his wife in 1946 at a football match in Culham .They made a date for the following Sunday to go to the pictures in Abingdon in the old cinema.  Abingdon Old Cinema

He also spoke of his time in the Air force from 1948 – 1953. He was station in Berlin and the day that King George VI died. He and his friends had gone for a drink (or several). They fell asleep on the underground and should have got out at Potsdam but instead went on to Potsdamer Platz . On arriving they were met by Russian Solders with guns.

They found themselves pulled in for interrogation.

Fredrick will speak more in the short film currently being made.

Posted by Sharon Woodward / WoodwardMedia at 07:34 No comments:

On Wednesday 12th March Helen Jacobs ran a workshops following on from the 1950’s commercials and children’s TV that we had watched the week before. 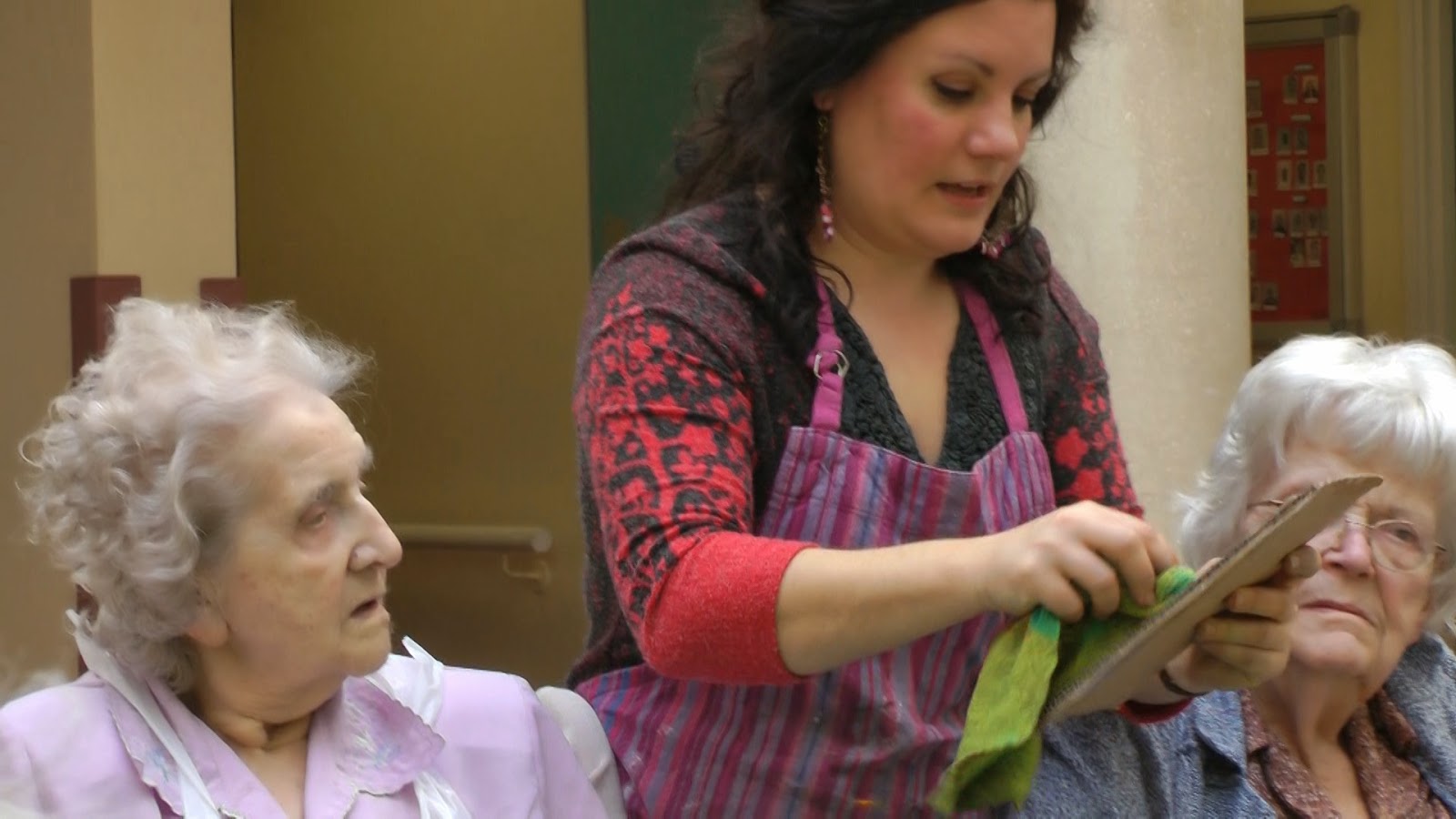 Helen had a number of 1950’s labels and art décor for people to feel inspired by.

The results were a wonderful selection of prints made by the group. 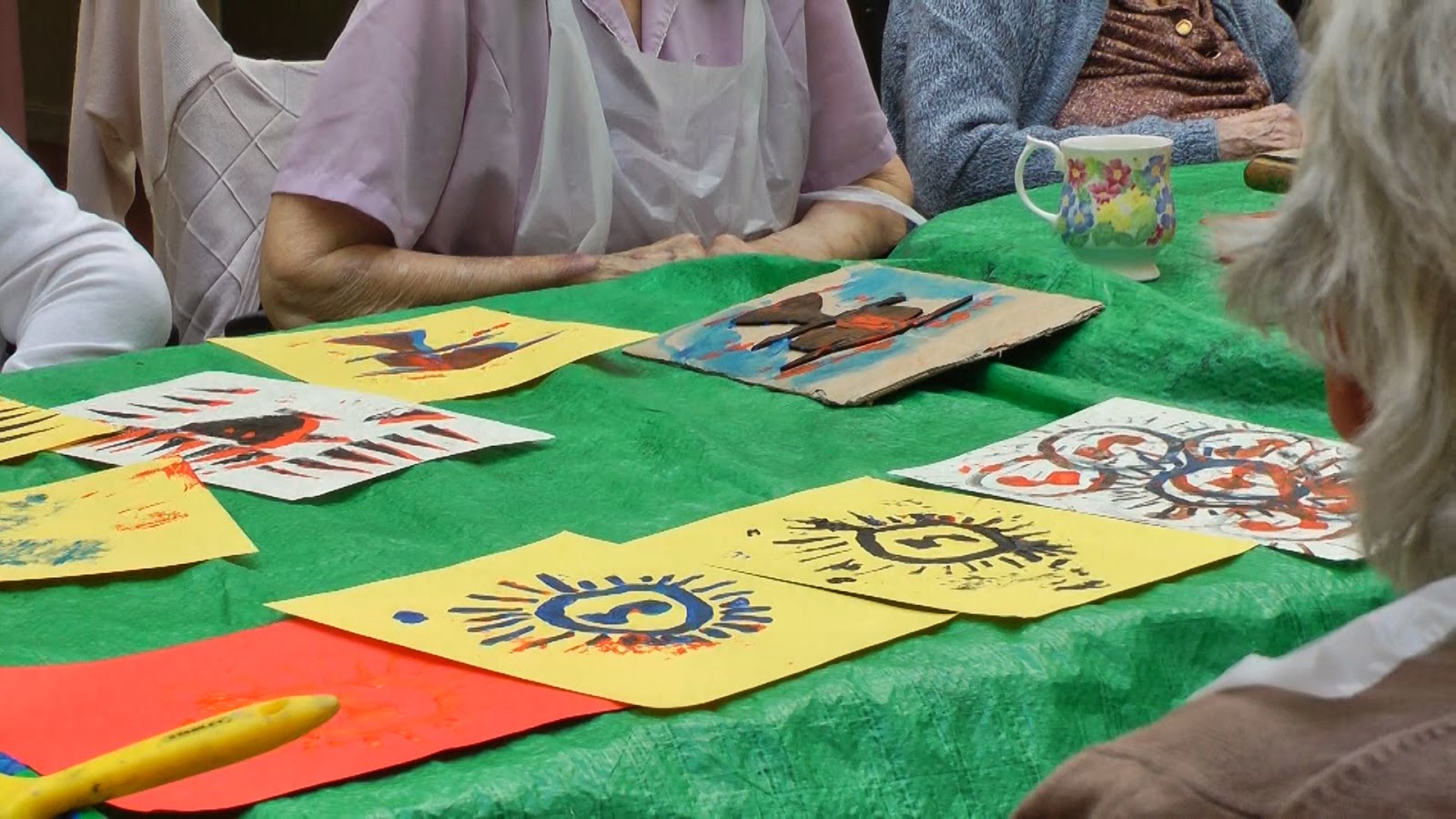 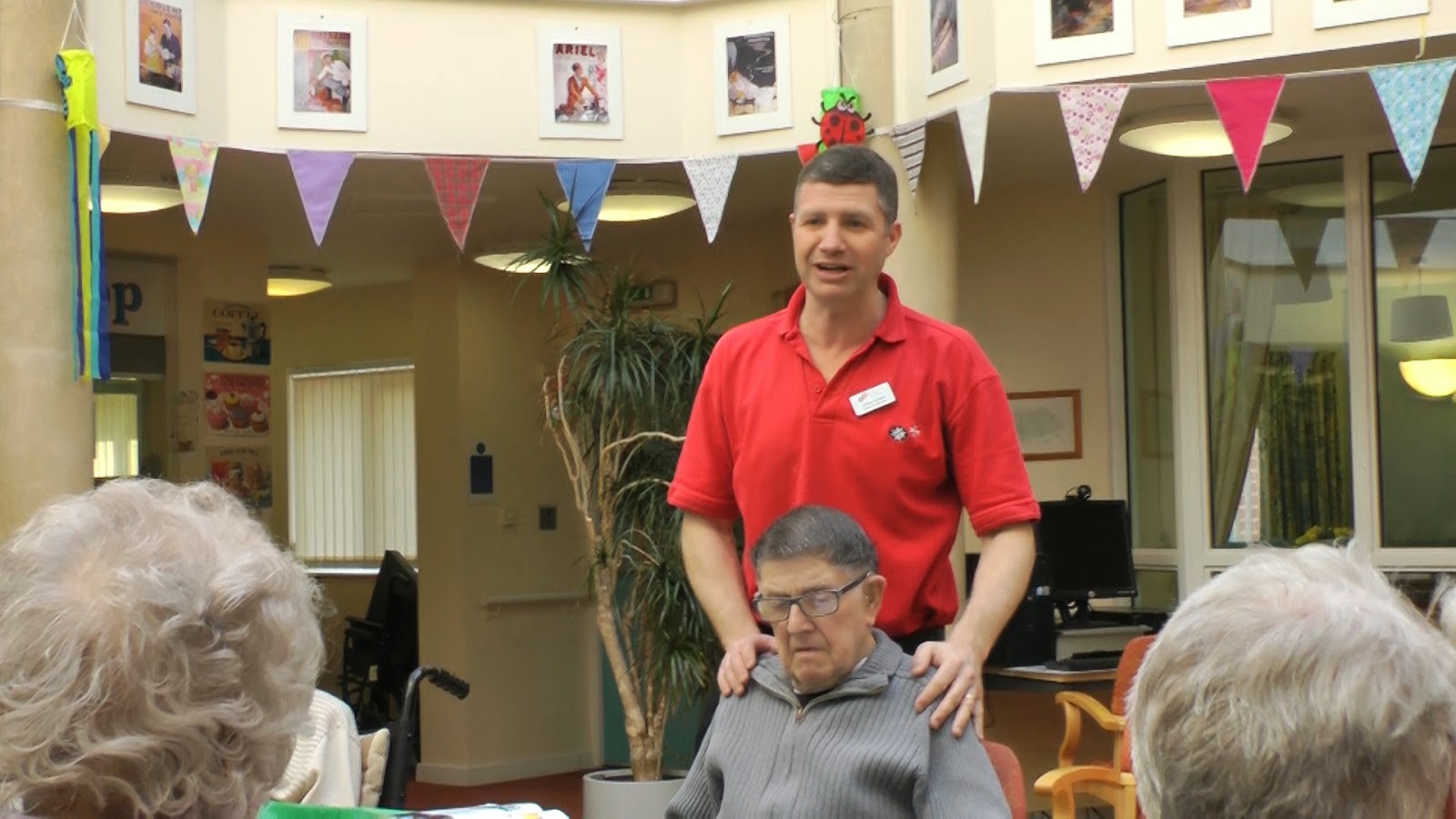 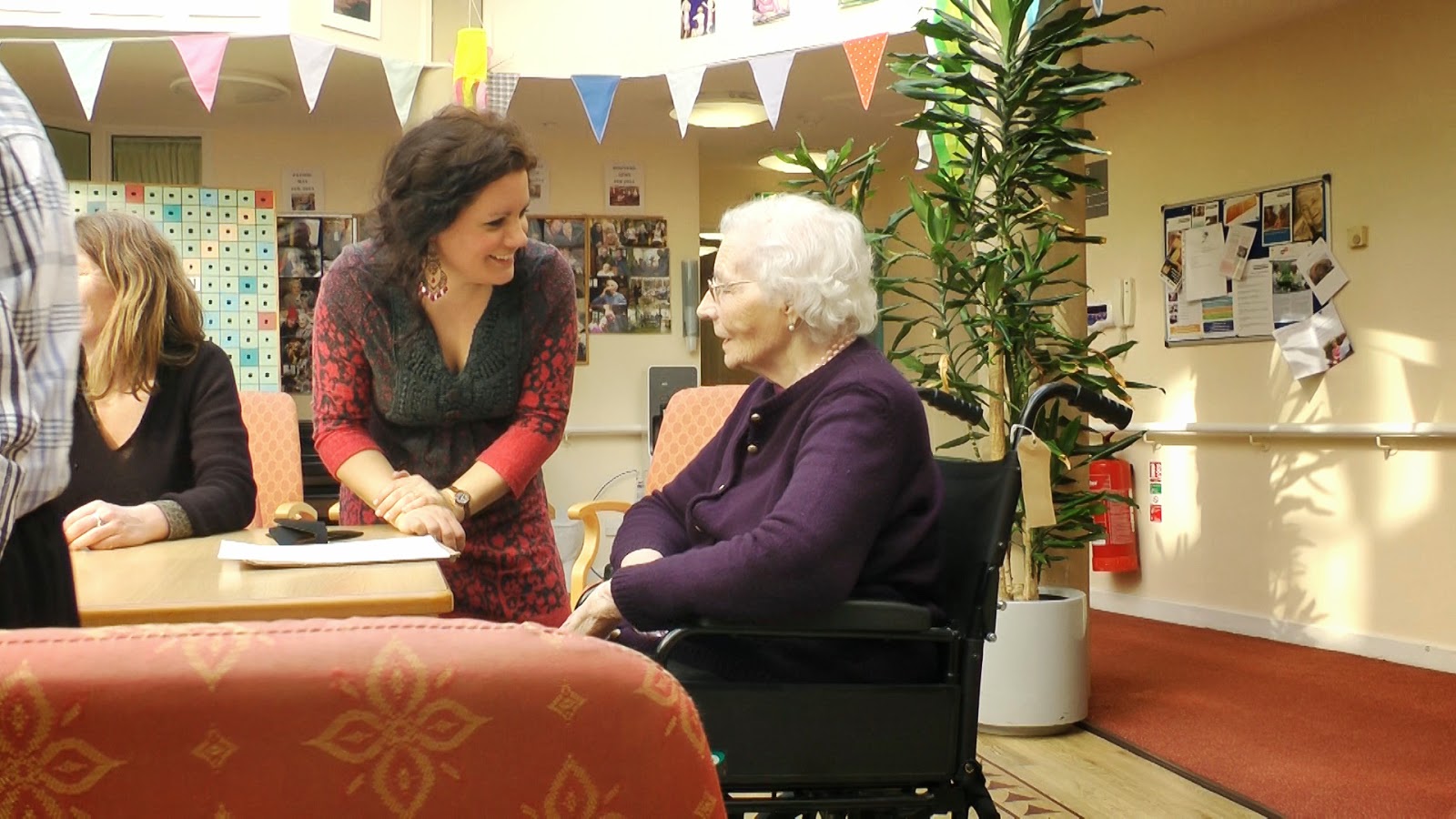 Then on Thursday 13th March Nick Gill and his piano came along and filled the room with some of his wonderful music. 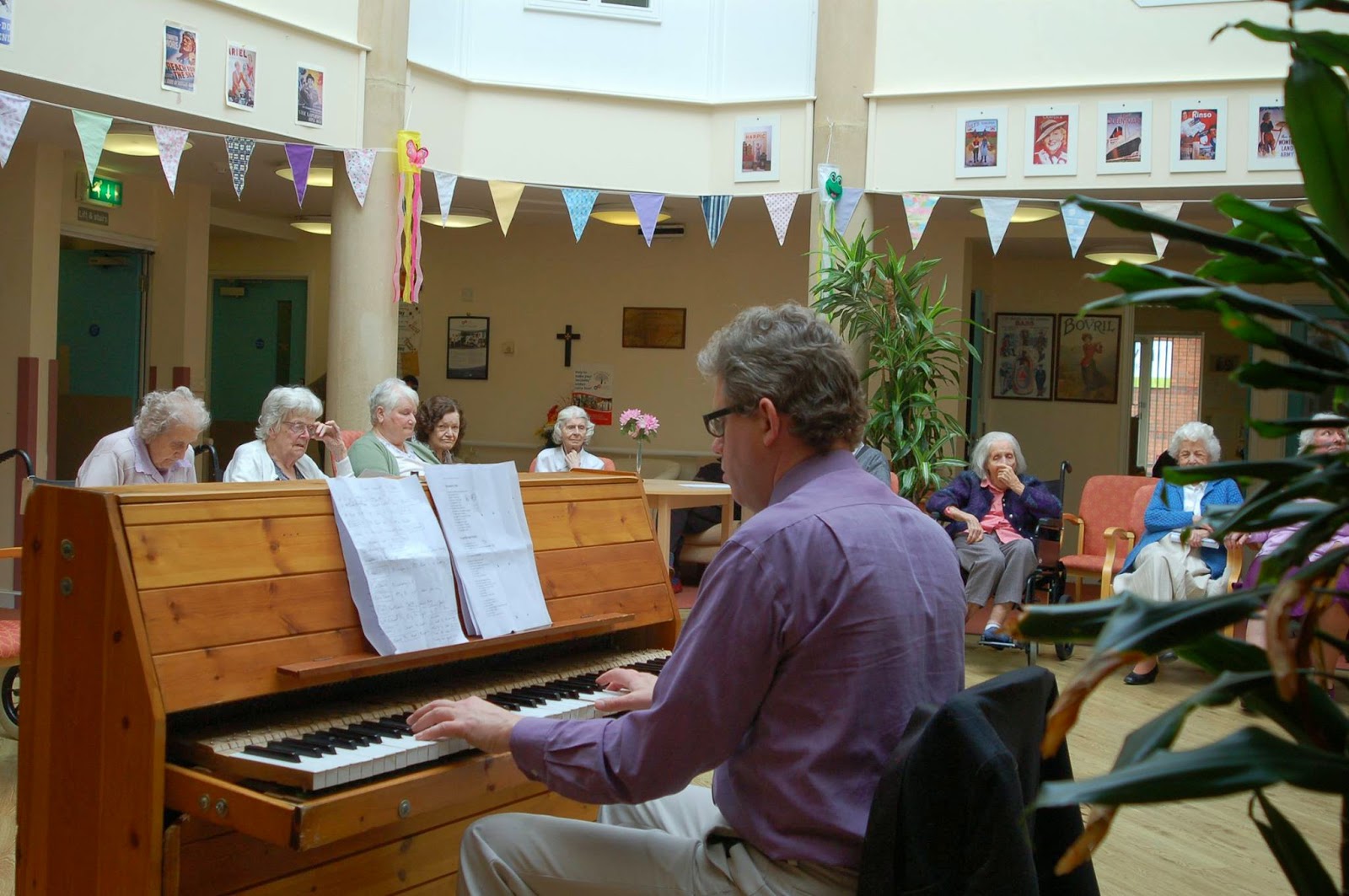 Bill Hailey -  Rock around the clock followed by a number of Doris Day hits - By the Light of the Silvery Moon, Moonlight Bay and
Secret Love (Calamity Jane). We had Louis Armstrong with Dream a Little dream, Fats Domino - Blueberry Hill. Elvis - Hound Dog and All shook up and old blue eyes himself Frank Sinatra - I've got you under my skin and I get a kick out of you.

Rock Around The Clock - Pilot

On Wednesday 5th March Cait and I went along to the Old Station House in Abingdon, the purpose of our visit being to explore memories with the residents and collect them for future generation. On arriving we were met by Jeff Denton (Activities Coordinator ) and taken to a large living room where residence sat already watching a large screen projector, which was playing a documentary.

Once everybody was settled we introduced ourselves and then played some of the archive from Youtube. The three archive groups I had set out were as followed: 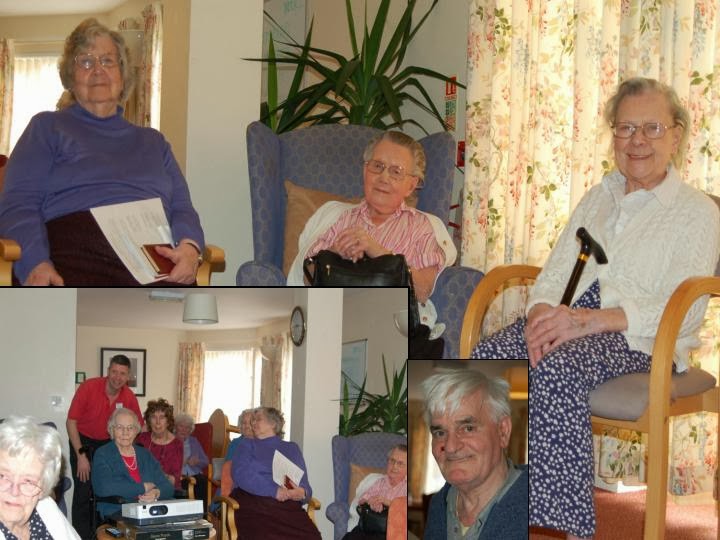 Elizabeth, Betty and Joan
(Committee Reminiscence Team )
foreground we see the Rock Around The Clock Team with Jeff
Richard to the right in the front


1950’s Commercials
On the Daz commercial the promoters were offering a competition where people could win £5.00 or £10.00 . We wondered what it would have been worth by today’s standards.
We asked and residence felt this would have been a substantial sum in 1950’s. We discussed wages at the time and were told that they did vary from £3 - £6 Richard (resident -reminiscence team ) remembered farm workers getting anything from £4 to £5 and £6 is lucky per week.

Jeff (Staff member) spoke about the Queens Coronation in 1953 many had shared a TV set to watch the event. Joan (resident - Committee reminiscence team ) recalled her farther buying a set for the occasion. 1953: Queen Elizabeth takes coronation oath

Richard also spoke of early Radio that was not electric or battery but a crystal set. He told us the first TV most people had was roughly  9inch set. Some were in a cabinet which was very popular – but could set you back as much as £200.

1950’s Childrens programmes
We then looked at  Children's TV - Betty (resident - Committee reminiscence team ) remembered her niece being made about Pinky and Perky and we had a looked at the old Watched with Mother programmers:  Watch With Mother

Most of the Children’s programmes seem to have been puppets.However, shows  like Blue Peter and  Crackerjack were around although the Pinky and Perky dance routine shown was from an episode of Crakerjack. We also spoke about modern TV programmes for example Teletubbies. It was interesting to draw a comparisons with Bill and Ben the Flower Pot Men.
Both shows had used a made-up childlike language. Here you can see a 1953  Full Episode of Watch with Mother .

1950’s TV Shows
Finally moving onto TV shows, admittedly I had mostly  found American TV series. So this was very quickly pointed out to me. Although many remembered the likes of Bonanza, I Love Lucy, The Lone Ranger and Perry Mason.

Elizabeth  (resident - Committee reminiscence team ) made a point of  flagging up Dr. Finlay's Casebook (Tv & Radio) one of the credible British drama's of the time. Elizabeth  also mentioned her crush on Leslie Howard and others highlighted actors such as Arthur Askey  and Charlie Drake.

People also recalled going to the pictures (Cinema), and the expectation that you would stand at the end the film for the national anthem. Those wishing to make a quick get away could expect stern looks from those waiting until the end.

It was a wonderful introduction and we really enjoyed speaking to everybody. The next session is with Helen Jacobs and followed the next day by Nick Gill and his piano, accompanied by Cait Sweeney. I am really looking forward to this.

Posted by Sharon Woodward / WoodwardMedia at 05:15 No comments:

Sharon Woodward / WoodwardMedia
Sharon is an award winning film-maker, with thirty years of production experience. First break in television was in 1984 with the new Channel 4's Eleventh Hour, Youth Series 'Turn It Up'. Sharon went on to train at Newport Film School, The National Film and Television School and in the cutting rooms of BBC Wales and Tyne Tees Television.